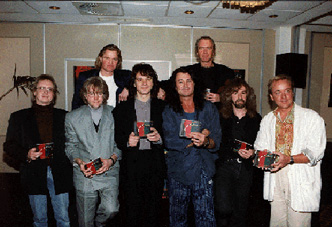 In 1990, I was approached by Rob and Ferdi Bolland, known by their works like with: Falco (“Rock me Amadeus” and “Jeany”), and Status Quo (“In the Army now”) to go together to work on a concept album-CD. In first discussions we have philosophized concerning what the concept should be about We decided to come to a consensus within a month’s reach and we also made a list of singers we’d like to work with on this project.

A month later I made the proposal to make a CD in relation with the Evolution of our world. This idea was picked up by Rob and Ferdi and was taken as a starting point. Meanwhile I was introduced to technician: Hans Weekhout who teached me all the “ins and outs” of the “Bolland Studios”.

“It was a fantastic experience working with these guys. Very professional and disciplined, yes I really felt privileged!”